The shell is made of fiber cement, but it could be wood, if you use the same type of insulation as we have done.
The glass lid is from a normal household oven, and it is just laying lose.
The head element and fan is from a normal household convection oven.
The Insulation is, 25mm Ceramic insulation plate, it is easy to cut and can handle more than 1200C.
We added an extra solid state relay to control the Fan, and we would have liked to have an extra output to control the opening of the lid.

We mainly design small PCB’s (max A5 size), and that means we can make the volume quite small.The size is important, because we want to keep the thermal initia as low as possible, to heat up and cool down as fast as wanted.
So: Keep size as small as possible, and keep metal and other material that can store thermal energy out of the chamber.
The glass lid is not a good insulator, so: keep good distance between the PCB and the lid!
That is a contradiction to keeping the volume small, but the glass I used was not insulating very well, so we had to keep good distance.

We have made a small table of an old stencil and an old grill. The purpose is to minimize direct infrared radiation, and make chaotic turbulence to obtain convention heat transfer. (without adding a lot of mass)

We have made a hole in the midth of the stencil. That is to make the air circulation as efficient as possible.
To minimize the effect of the poorly insulated glass lid, it is a good thing to keep the K-probe close to the PCB.
Our first design, was guiding the airflow, from the heat element to the reflow chamber, and back to the air pump (fan).

That means that we had a controlled airflow (from only one direction), but that wasn’t working well. Because of the cooling effect of the glass lid, the temperature in the beginning of the PCB, was much higher than the temperature at the end of the PCB. So we are using chaotic airflow.

We haven’t checked the temperature different places in the chamber, but it looks like the solder is melting almost equally, so we are just using the oven as it is, with good results.

It is also available a nice PDF doc with the step by step guide and comments from the author: download it here
Gareth's Custom Reflow Oven Enclosure 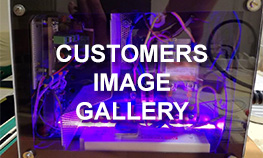